Through the sixth-floor office windows, I was looking at the heavy dark clouds and the rain pouring out of them. I knew from my previous experiences, the traffic in Gurgaon gets bad after evening showers. I started early for home, a distance of about 6.5 km. I drove about 4 km and near Signature Tower found myself driving into the road leading to the Huda City Center metro station with at least a foot of running water under my car. About a 100 meters further, I stopped in the middle of standstill traffic. In next two hours, I moved about 300 meters. It took another 30 minutes to negotiate a right turn and join absolute chaos and mayhem, now best known as - the "Gurujam"

Autos packed with sweating tired people, OLA/UBER cabs abandoned by passengers, single terrified female drivers in brand new cars, bikers happily idling their bikes, guys passing on cigarettes to their newly formed brotheren, occasional groups of people returning back to the metro station, an ambulance with flashing lights on top, the Gurujam had it all.

On everybody's face there was three things - frustration, disbelieve and that peculiar look of defeat you get when you are cheated.

I stopped the car engine and stepped out. It was getting humid inside. The air outside was heavy with exhaust fumes. A couple standing near the next car ahead smiled at me. We engaged in a small conversation on where we stay and the situation at large. Looking at my weary self, the wife offered me a small bottle of mineral water. I was hungry, but that probably was the best thing on offer. I thanked her as I gulped it down in a go. I walked over to the ambulance a few meters ahead and leaned over to check if all was well. An accident victim was sleeping. I glanced over at the driver with a question on my face. He gestured towards the sky, probably meaning "At the mercy of the Gods !"

That I cannot reach home before midnight was still not sinking in. I called home and told my wife it will take at least a couple of hours more to reach home. With people shouting at me, I changed to the left lane and parked my car a little away from traffic. That is when I joined a group who were wondering if they can leave their car on the road and go back home. My mobile was showing low battery alarm. By the time I reached home it was 11.30.

Like a typical educated good Indian citizen, I read the evening story in the morning newspaper and headed for the office.

Although roads and drains are not complex subjects, like many simple subjects they are also the least understood. Any interconnected drainage system like the one at Gurgaon works as a three-tiered system. This three-tiered system can be compared to a roadway system. Small streets in neighborhoods and towns carry traffic to larger, secondary highways. Secondary highways, in turn, connect and carry traffic to major highways. Similarly, neighborhood ditches, swales, and conduits are referred to as tertiary drainage system, carry excess storm water to secondary canals. In turn, secondary canals connect and carry excess water to our primary drainage system.

Primary canals for Gurgaon - The NH8 Drain, The Badshahpur Drain and the Najafgarh Drain. Water bodies such as ponds, lakes, and lagoons also play a role in water management. While they do provide a beautiful view, their real function is to hold excess rainwater or to carry it off to regional storage areas. 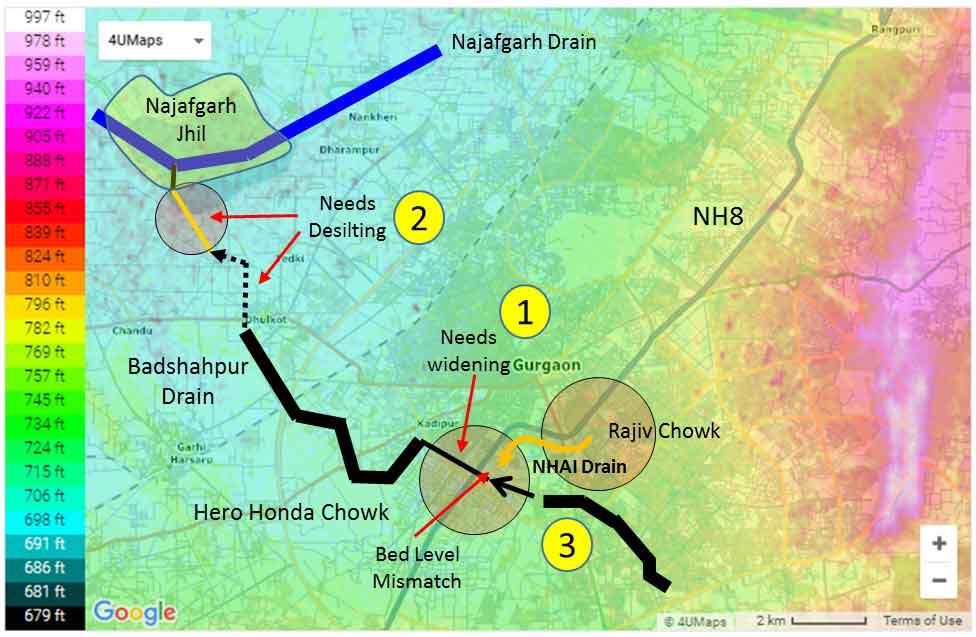 Topography of Gurgaon showing the problems reported in the newspapers
Elevation (Mean Sea Level) of any point on the map is read from the colour bar on the left of the map.
1 - Reduced width of drain, 2 - Desilting required, 3 - mismatched bed level

Functioning of any drainage system is intimately connected to Topography of the area, Size of drains, Slope of the drains, and Hydrology and soil properties of the area.

Topography is about the surface features of a place or region on a map, indicating their relative positions and elevations. This decides what gradient exists between two points. If one point X on the map is at a higher or lower elevation with respect to another point Y and what comes in between them. Gurgaon topography map is available at http://en-in.topographic-map.com/places/Gurgaon-5465177/

Here is a topography of the Ghata Lake are in Sector 58. 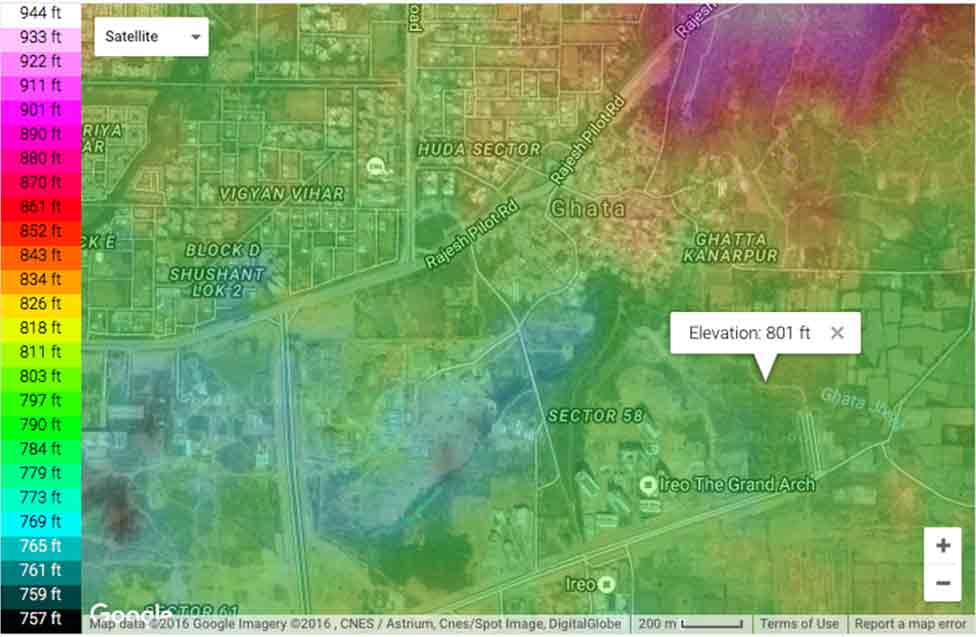 Elevation (mean Sea Level) of any point on the map corresponds to the colour bar on the left on the map.

The size of drains depends on how much water can flow. Depending on how drains of different tiers are laid out on an urban master plan, the width and depth (called cross-sectional area) of a drain is decided. Typically, larger drains are wider at the top than at the bottom. This makes the initial construction and subsequent maintenance - like desilting easier.

Hydrology and soil properties of the area is a complex subject and deals with the type of soil and water, how much silt deposition, water retention, soil erosion, and many complex factors affect the drainage system.

Consider the following obvious issues that directly relate to the problem

However, these are the immediate short-term needs. Restoration of the natural streams, collecting ponds, lakes, catchment areas, and implement rainwater harvesting (as per studies) are the long-term requirements. Incessant and uncontrolled urbanization has been eating into restricted areas of the master plan for a long time and now we have a city with its natural drains restricted. It is time to correct some of our old mistakes. This will require a lot of hard work and patience.

On 29th evening, The "Times Now" debate was on. Arnab Goswami was in his usual form. The subject was the flooding and gridlock at Gurgaon. There were some 10 faces on the familiar TV screen. Some usual political party spokespersons, some eminent citizens, some people from government and administration were on the show. But not one engineer was there to explain what led to what. 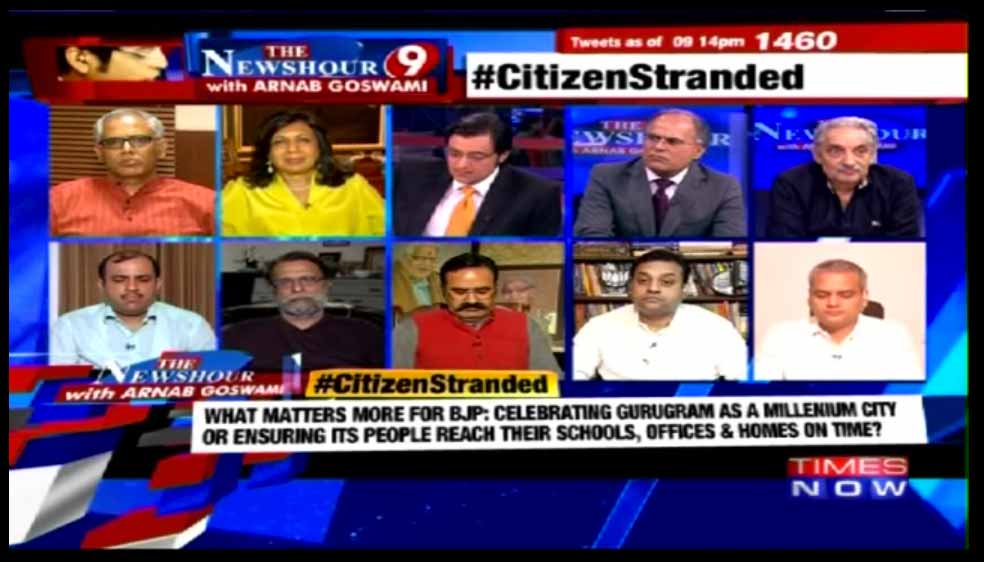 Being an engineer, I was trying to understand who, what, how, of such a disaster. That is why, I was watching the debate, wondering if anyone can describe in plain English, how it all happened, for the public to understand. Everyone wanted to know how much it rained, what areas got water logged, why the drains in those areas did not work, the sequence of events, what were the defective elements, reasons of their failure etc.

If an expert civil engineer or an urban roads/drains designer would have explained these details with a suitable map of Gurgaon, showing the topography, how much water was getting stuck where, how much was flowing from where to where, what are the short term and long term solutions, etc., that would have given the viewers something tangible. That something would have kept the viewers engaged to the debate. That, in my opinion, would have taken the TRP of that channel through the roof. However, nothing of the sort happened. The discussions remained focused, on which political party is responsible, where the money is going, whether the spokesperson is willing to apologize etc. etc. I browsed other TV channels and they were no better.

I was wondering why can’t problems like this be described as a small story with facts and figures? Is it because getting the technical details is difficult or not available or not there? The power of media can be better utilized if complex stories are told by people who understand the details and know how to tell the story to educate and engage viewers. Good luck Mr. Arnab Goswami.