There is a well-known saying “One accurate measurement is worth a thousand expert opinions”. And nowhere else it is more appropriate than at project sites, where every day, new problems surface and most problems are in the realm of physical interference, hard mismatch, slow movement or settlement. 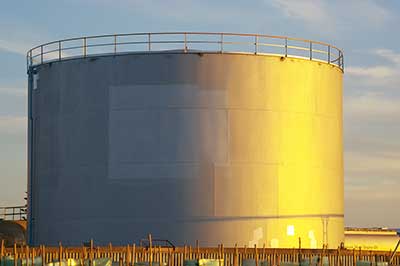 This is a story about large storage tanks with earthen foundations for storage of hydrocarbons. The tanks that I am talking about had diameters more than 30 meters and height more than 20 meters. These tanks had sunken bottom type for maximizing the storage volume. They were of fixed cone roof with internal columns supporting the tank roof.
During the hydro testing of these tanks, extensive settlement (nearly 150mm) was observed at outer shell.

Experts attributed the problem to the clay layer at almost 40 feet below the foundation bottom. This layer was missed out or ignored during the soil investigation report. This fact came to light at the time of hydro testing and there was no way any kind of foundation improvement below tank bottom was possible.

As water was pumped into the tank for the hydro test, the weight of the water started pushing the tank into the soil. The settlement of the tank started stabilizing during hydro testing as the water content of clay layer was getting squeezed out due to the sustained load of the water. Looking at the huge amount of settlement, experts with similar experience and knowledge were brought in to give their opinion on final settlement values and its impact on tank’s structural stability and acceptability for operation. The amount of settlement was such that, the tank roof was losing its footing from the tank bottom. We were at a point when any further settlement was gravely dangerous for the tanks, but we were not having any means of measuring settlement at the center of the tank. Opinions of failure were heavy in all discussions and without measured values of the settlement, there was a speculative concern, because there was no measurement available to know if there was any additional settlement – for example in the last two days. In the absence, the fear of unknown took over.

Hydro test was stopped without completing the required loading and tank was emptied. The tank bottom had sunk so much that improvements were required to central supporting columns by lifting them to their original location using hydraulic jacks. Additional supports were provided below the central columns to make up for the gap due to settlement. After all the improvements were completed and checking the structural stability of tank, hydro testing was restarted to achieve the final settlement at filled up load. After a repeat of this procedure couple of times, the settlement appeared to be stabilized.

It was very important to commission these tanks without delay as the tanks were to be supplied to the client for whom commitments were at stake.

The real challenge was to measure the settlement at the center of the tank during operation so that we will come to know of it before any possible failure. The measurement was tricky because the tank was not sinking freely lock-stock-barrel as one unit. The bottom of the tank was sinking and pulling the top. The very nature of simultaneous settlement of shell, tanks roof, and bottom (possibly by different amount) was such that no reference point was available to make measurement simple. It was very clear that only if a convincing measurement of the total settlement can be done, will it generate a feeling of comfort and control in the matter. Whether the tank was still settling or has reached its final level was giving everybody a lot of concern. The question that I asked myself was – can we accurately know how much is the tank sinking? It was a dumb question because nowhere in the world people measure the settlement of such tanks during their life. Tanks are made, they are filled with water for the hydro test, they sink a little and then people forget about it. But here in our case there has been a large settlement and the tank is at the limit of its structural stability, and if it sinks further, it might fail. But will it sink any further? No one knew. But the larger question was if it sinks any further, can we measure? We did not have any means of measurement.

Here a completely out of box solution was developed and implemented which worked.
The solution was to weld a hook at the center of tank bottom and fix a wire rope to this hook. The wire rope was taken out at tank top and attached to a structural frame with a pulley. To the end of wire rope, weights were attached to keep it under tension. A scale was tied to the structural frame to measure the movement of weight hung at the end of the wire rope in case of any settlement. Before filling up the tanks the Reduced Levels of tank top structure was recorded (from a fixed structure top of a building some 500 feet away). And the top level of hook welded at the bottom plate were recorded. While the tank was getting filled up, at a regular interval the wire rope movements on the scale were recorded along with the Reduced Level of structure frame to work out the exact settlement at the center of the tank. 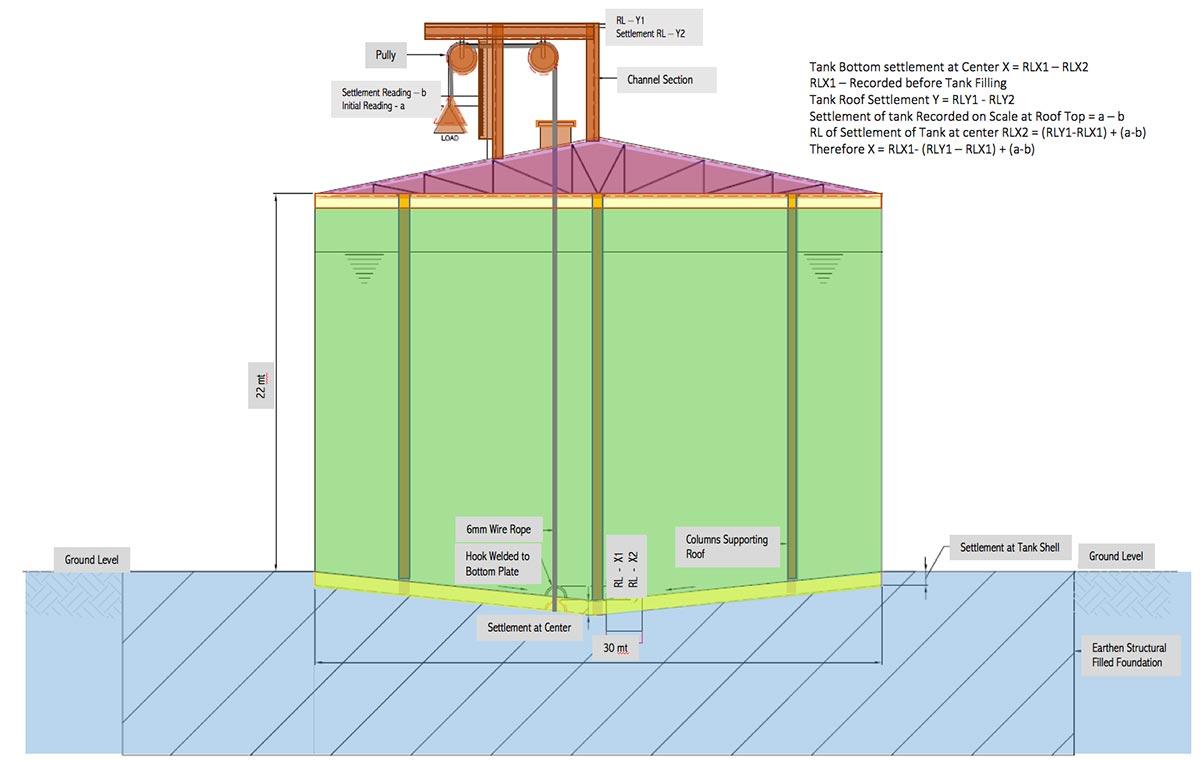 Attached drawing shows the detail of this Jugaad scale to measure tank bottom settlement during operation of the tank. The measurements were monitored for next 3 months. Everyday 3 readings were recorded.

Today after 10 years, the tanks are still under operation.

« John, You are Wrong ! A bolt out of the blue »
Comments
Lovies