Top management introduces systems and practices that define all successful organizations. Equally important is a healthy work culture they inculcate that drives staff at all levels to seeking solutions. This “tech story” is of a group of engineers and workmen that restored the design capacity of the Coal Handling Plant of National Thermal Power Corporation’s Korba Super Thermal Power Project (KSTPP) in the mid-1980s.

KSTPP is amongst the first indigenously supplied Super Thermal Power Plant in India. The initial 2,100 MW capacity was implemented in two stages, first the three 200 MW units (1983-1984) then the three 500 MW units (1987-1989), which provided a proper learning curve. The Merry-go-round (MGR) and Coal Handling Plant (CHP) were designed to transport about 31,000 tons of coal every day from the nearby opencast Gevra mines. The CHP was rated for 2,000 tons of coal per hour so operating it for two 8-hours shifts should have sufficed to feed the required coal for all the boilers operating at full load. However, in 1985, despite running round the clock, the CHP was unable to feed just 9,000 tons required daily by the three 200 MW units. To add to the woes, the same coal unloading facility was proposed to supply another 4,000 tons per day to the BALCO Captive Power Plant that was being constructed next to KSTPP. The project management’s immediate step was to convince headquarters and place the order for the Rs 440 million CHP augmentation for ensuring the coal supply for 2,370 MW capacity.

Around this time, I was transferred from plant operations to CHP maintenance. The issue of CHP capacity had to be addressed, it had to be increased to at least 17,000 tons per day when the first 500 MW unit was ready for operation since time was needed to bring the CHP augmentation system on stream.

The first few questions I asked after moving to CHP was - at what capacity is the CHP operating? If it was not 2,000 tons per hour, then how much was it? Was it an operational issue? Were the belts running idle most of the time? Even if it was operating at 1,000 tons per hour, feeding 9,000 tons per day to the 600 MW and another 7,500 tons per day to the first 500 MW unit should be theoretically possible in about 17 hours. We checked the speed of the conveyor belt and it was according to design. There were no meters to measure the actual amount of coal being carried by the conveyor belts and we did not know of any such measuring device. Therefore, we chose a basic and crude approach. Simple arithmetic indicated the amount of coal that should be over a 50-meter length of the conveyor belt for the capacity to be 2,000 tons per hour. We stopped a running belt when the coal loading “looked normal” and shoveled into bags all the coal lying over 50 meters of the conveyor belt. All the bags were weighed. To everyone’s dismay, the observed operating capacity was only about 600 tons per hour. It became clear that very little coal was being loaded on the conveyor belt so the problem had to be in the paddle feeders that shifted coal from the bottom of the track hopper to the first set of conveyor belts.

There were two conveyor belts below the track hopper, each had two traveling paddle feeders (picture below) that shifted coal from the hopper bottom to the conveyor belt. The track hopper was below the rail tracks; it received coal from the merry-go-round train. The train comprised 30 wagons, each carrying 60 tons of coal. The bottom of the wagons opened and dropped 1,800 tons of coal into the hopper. The walls of the hopper were slanted like a truncated V with an open bottom, and there was a table at the bottom to prevent coal spillage. The paddle feeders had three horizontally rotating, semi-circular arms that moved over the table, reaching about half-way across the hopper. It had a gearbox, fluid coupling, electric drives, and reeling cable to allow it to traverse the full length of the track hopper and empty out the coal received from the wagons. The paddle feeders on one side could transport the coal to the stockyard, and simultaneously the other side could feed the boiler silos. 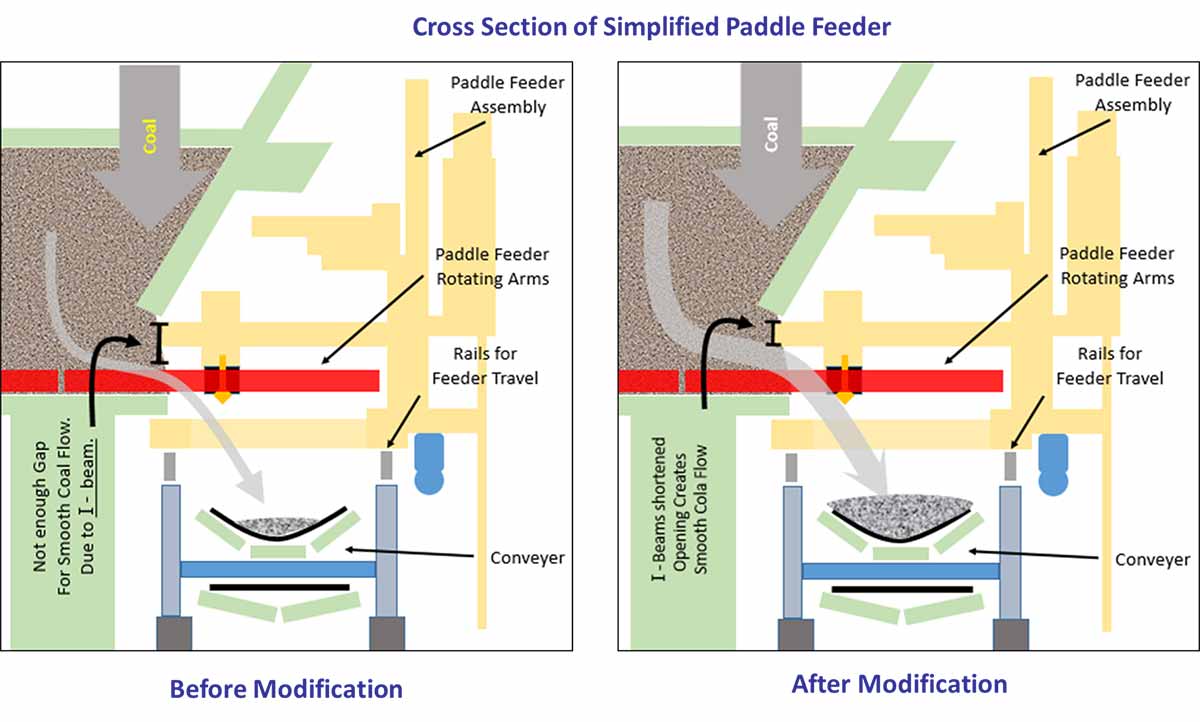 The paddle feeders were operating far below the design capacity. The first doubt was that the rotational speed of the curved blades was low. We tried a gearbox with a different ratio and a higher capacity fluid coupling. We noticed that the direction of rotation was the same on both sides, whereas the curved arms were mirror images. Reversing the rotation was a simple thing for electrical engineers. These changes improved the operation but not the capacity. Several of us, including my electrical maintenance colleagues, spent innumerable hours observing the paddle feeders so we could know what will increase the flow.

Late one afternoon, J. Mahapatra and S.S. Sen (both electrical engineers) called me to the track hopper. They pointed out that the paddle feeder arms were each dragging a ton of coal out of the hopper. Instead, shouldn't the coal in the hopper flow continuously to the conveyor belt like wheat from a bag that has a small opening at the bottom? The hopper slope should ensure a flow when the paddle feeder arms created a small opening over the table. This sounded logical. Next, B. Choudhury and T. Gopalkrishna, the zealous mechanical maintenance engineers, identified a 200 mm I-beam in the path of the coal flow. They suggested that reducing the beam height (web) by half would create the required opening. As the beam was providing structural integrity to the paddle feeder the downside of cutting it could be very drastic. At the same time, we knew that the coal flow would not be smooth without adequate opening. We decided to take the risk and modify one paddle feeder. The skilled welders of CHP were given the task to cut beam web and add reinforcement to the remaining part. It was night by the time the modification was carried out so we decided to run the paddle feeder the next morning. It was possibly the longest night for me.

Next morning the main “conspirators” came early to the track hopper to find out if the modified paddle feeder worked. As soon as the arms started rotating, our hearts leapt up in joy seeing the smooth flow of coal from the hopper to the conveyor belt; the troughed conveyor belt was running brim full with coal. Undoubtedly, the loading was now close to or even above 2,000 tons per hour. The capacity problem had been cracked. With the modified paddle feeders the existing CHP could feed the required coal for 2,100 MW. Moreover, the coal conveyor will run fewer hours to fill the boiler coal silos thus time will be available for scheduled maintenance.

I attribute this success in solving an intractable problem to the later success in my career. The same is possibly true for other colleagues who worked on the modification. It gave us tremendous confidence in problem solving, even when working in very different functions.

There are several lessons from the experience: