Many Projects create records. Some create history. But there are some that become history itself.

One of the biggest civilian development projects on the face of the earth - the Great Man-Made River or GMMR as it is known, was one such project. In 1990, it was history in making. You may be wondering that this story is about a crude oil pumping station or a refinery. No, it is the sweet water dream project known as the “Great Man Made River Project”. Normal water is in abundance in a country like ours, but the same water is a precious commodity (called sweet water) in the North African Sahara. Every drop of sweet water is extracted from saline sea water. And in those parts of the world, you possibly pay more for a litre of water than a litre of gasoline.

The late Libyan Leader Muammar Gaddafi described the project as the "Eighth Wonder of the World."

Late 80’s Libyan Govt., under Muammar Gaddafi, planned to utilise huge underground sweet water reserve discovered in the Sahara Desert, about 650 km south of the port city Benghazi. In August 1984, the Great Man-Made River Project began. Around 1,300 wells were planned to dig into the desert soil, some up to 500 meters deep, to pump water from the subterranean water reserve. The pumped water was then to be distributed to 6.5 million people living in the cities of Tripoli, Benghazi, Sirte and elsewhere through a network of underground pipes 2,800 km long. When the fifth and final phase of the project is complete, the network will have about 4,000 km length of pipes that will enable 155,000 hectares of land to be cultivated. Even with the last two phases yet to complete, the Great Man-Made River is the world's largest irrigation project.

The story relates to a unique experience in the first phase of the project. Govt. of Libya awarded the contract for GMMR Phase I to install large submersible pumps, more than hundred (100) in numbers in Sarir and Tazerbo area to lift the water; store in two huge tanks of about 100 m in diameter at the site and lay two nos. 5-meter diameter pre-stressed concrete pipes more than 1000 km long across the desert to transport water to the coastal cities Ajdabiya and Benghazi. These water pumps were to be powered by 6 x 15 MW Westinghouse gas turbine generator sets installed at Sarir Power Plant, located near the pumping units. Gas Turbines are to be fueled by diesel oil sourced from a distillate pipeline running across the desert and stored in Distillate oil tanks at power plant site. Fuel to Gas Turbine units is to be supplied through six fuel forwarding pumps, one for each GT, located at tank farm area, around 200m away from GT units.

We were a part of the Japanese EPC (Engineering, Procurement and Construction) commissioning team responsible for supervising erection, commissioning and initial operation of the power station till it was to be handed over to Libyan operating staff. The Gas turbine power generating units of the Phase-I project are shown in the above figure. 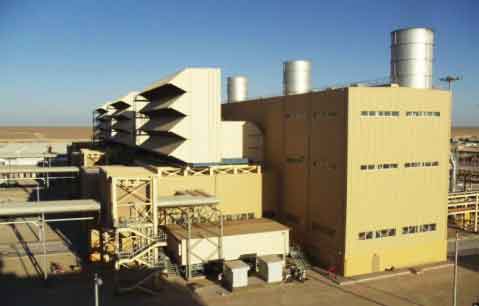 It was a chilly morning in early December 1990 at the temporary colony of the Sarir Power Plant, around 600 km from coast inside the Sahara Desert. The morning sun was visible through sand dunes. There were no greens around, no chirping of birds except barking of a few dogs from the Korean camp. The only access to the site was a metal road cutting across the desert linking the coastal city and crude oil wells deep inside the desert. Mirages in sand dunes, several small villages with few dozen houses and date palm trees looking at the scorching sun greet you on your way to site.

It is still clear in my memory. On the auspicious day when the first Gas Turbine was scheduled to be fired, we were ready at the site around 9-00 AM. The Gas Turbine was on turning gear since last night. (Turning gear is a device that keeps a large rotating machine slowly turning at very low speed to ensure healthiness of the equipment when it is not running). All pre-commissioning activities and checks for the Gas Turbine Generator were completed. Fuel supply system and starting diesel were lined up and forwarding pumps were set in the automatic mode to synchronise with gas turbine operation. The commissioning team was fully geared up, few at the control room and others distributed around the gas turbine unit to physically observe and report in case of any abnormality.

Everything looked healthy. Taking the consent of everyone, the gas turbine was started.

We held our breath as the starting diesel made a groaning start. The gas turbine which was rotating at a very low speed in turning gear mode started speeding up. All eyes were focused at the monitor watching speed, vibration, lube oil pressures and temperature, gas turbine inlet air pressure and exhaust temperature. The gas turbine reached its preset ignition speed for fuel firing. Fuel forwarding pump started and fuel pressure was established. The familiar whistling sound of the starting of the GT main fuel pump was heard. Suddenly the gas turbine went into shutdown mode.

Under Automatic startup sequence of GT, the starting diesel unit will take the gas turbine to a predetermined speed from the turning gear. At that speed, the fuel forwarding pump will be started followed by the main fuel pump. Fuel firing will take place in GT combustion chambers. Starting device will continue to raise the speed of the GT with a simultaneous increase in GT fuel injection rate till the gas turbine reaches its self-sustaining speed. Thereafter GT accelerates to full speed while Starting diesel gets automatically decoupled and goes to cool down mode.

The disappointment was visible everywhere. Under such a circumstance a Sequence of Event (SOE) print out and Alarm list is generated to identify the root cause of the failure. The Sequence of Event showed no abnormalities in parameters. All auxiliaries looked to be healthy. The “First Up” root cause (the first event to start the tripping sequence) showed “tripping of the main fuel pump”. Electrical & Instrument commissioning engineers made a quick check of the pump protection circuits but no fault could be found.

It was decided to go for one more attempt to run the gas turbine. We could see the seriousness in all faces and geared ourselves up again. The second START attempt also was aborted and the SOE list was identical to the first trial. Commissioning Team decided to discontinue the trial till exact reason for starting failure is identified. The Question was “Why did the fuel pump trip immediately after start ?"

We were back at our site office portacabin with a copy of Sequence of Event and Alarm print outs and started browsing through the start-up logics of the main fuel pump and the gas turbine unit start-up sequence in anticipation of a possible clue. After a thorough review, it appeared that “Low fuel pressure at gas turbine main fuel pump suction” could be one of the possibilities for tripping the pump.

A close look at the start up data supported our assumption - there was a transient decay in fuel pump suction pressure. Immediately, the focus was to analyse if there is a design fault in the fuel supply system.

Let’s look at fuel supply schematic in the figure below:

Fuel is supplied to the GTs through a 3-inch common supply header and excess fuel from gas turbine return to tanks through a 2-inch return line. Starting off each gas turbine automatically puts the dedicated fuel forwarding pump in service followed by the gas turbine fuel pump operation. One 1-inch by-pass line at the end of the supply header is provided for minimum fuel circulation and thereby to ensure stable fuel header pressure in supply loop during start-up of the first gas turbine.

The design appeared to be fine for “steady state operation”, but what about the transient condition? The fuel being incompressible in nature, sudden suction through gas turbine main fuel pump during start-up could be responsible for an instant drop in fuel supply pressure at the header and thereby low fuel pressure at the pump inlet. The team was in agreement. So, how to resolve the issue?

The ideal design solution, in this case, is to add an Accumulator of required volume in the supply header to take care of the surge requirement, as shown in dotted line in the schematic. However, this being a time-consuming process involving design, procurement, fabrication, supply and site installation; can’t be implemented immediately. Other suggestions like increasing the suction line size, bypassing the fuel pump suction filter during start-up, operation with two forwarding pumps for first gas turbine start-up etc. were discussed but could not be readily agreed.

The Instrument Engineer had a different idea - The “transient pressure drop” being for a very small duration, why not we delay the low fuel pressure signal by a preset time to allow the system to stabilise and the gas turbine fuel pump would trip only on “sustained low suction fuel pressure”. Great idea. There is a time delay between gas turbine fuel pump start and fuel firing (ignition) command. Looking at the transient pressure data, a time delay of 3 sec appeared to be sufficient.

The proposal was discussed with Westinghouse gas turbine commissioning team and agreed. The fuel pump protection logic was modified. Needless to say, we were very tense in the next morning and kept our fingers crossed as the third trial of the gas turbine was to start. By God’s grace, everything went smoothly. The gas turbine could be fired and “full speed no load” condition was successfully achieved without fuel pump trip. The entire commissioning team celebrated the occasion. The logic was subsequently modified in other GT units.

Commissioning is a tough job. But the satisfaction you get when a huge machine exactly behaves in a manner you imagined with the help of your knowledge and experience is unmatched.

« Visualize and Animate Water from Another World »