The fragrance of past is sweet sometimes when you sift through the dusty pale yellow papers, more so when you revisit old memories after 23 years. Cherished past unfolds like a movie as you close your eyes.

On a recent vacation, while looking for some of my old tax documents, I accidently came across some old and forgotten documents and was immediately transported back to 1993. 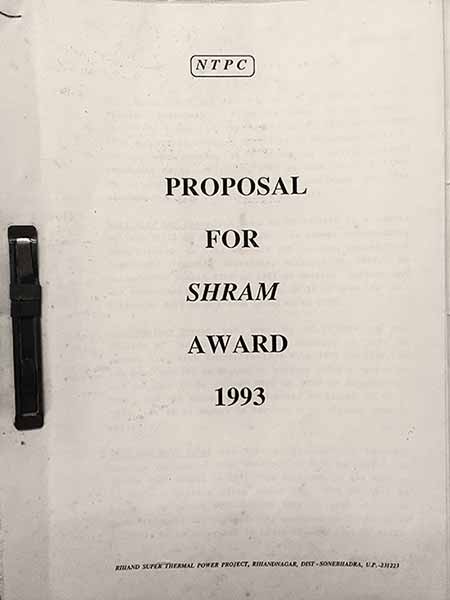 Rihand Super Thermal Power Station of NTPC is a perfect place worthy to be called “End of the world”. Situated in a remote place of India, where borders of two states meet. The nearest city of Varanasi was located 225KM away. For a young engineer like me, there was no life after work, except friends, and the Executive Club. However, the isolation created lifelong bonds.

Rihand project was built with British aid and most of the equipment were imported from the UK. The boilers were fed on pulverised coal. The coal grinding mills, critically required for uninterrupted electricity generation, were of Babcock make; and different from the BHEL mills of other power projects of NTPC. The grinding elements consisted of Top and Bottom Rings with 10 Steel balls sandwiched in between. The hydraulically loaded Top Ring was stationary, while the rotating bottom ring would rotate the balls. Coal was fed on the centre of the turntable which would then get ground between the balls and the bottom ring.

Indian coal is hard, and therefore the material of these elements was hard called “Ni-Hard” steel. The hardness of the coal, causes the material of the grinding elements to wear. The life of the grinding elements was around 7500 running hrs, roughly about a year. So after 2-3 years of operations during 1989-1992, the spares also were exhausted. The quotations for the new rings and balls from the OEMs yielded an expensive prospect of approx. INR 1 crore per set.
Therefore, we started thinking how to prolong the life of the grinding elements. Reducing the hydraulic pressure on the top ring increased the life incrementally, but at the cost of quality of pulverisation. The experiments with the harder materials also proved futile.

With this, four experienced and brilliant workmen came up with a simple and seemingly crude idea : WHY NOT REPLACE TOP RING WITH A USED BOTTOM RING?

The basis of such unconvincing suggestion was that the used bottom ring has almost 3000 Hrs of life, and we could use it as a top ring. With a profiled old bottom ring and used balls, the life would be extended by at least 50%. The OEM put his thumbs down for obvious reasons. It took quite an effort by the Maintenance department to convince the General Manager and higher-ups to agree to such a crude idea.

With some minor modifications, the idea was implemented in one coal grinding mill. The results were encouraging. After some iterations, the implementation was followed in other mills. Not only the life of grinding elements increased, but huge amounts of precious British Pounds were saved.

The idea was appreciated by all in NTPC, resulting in presenting the case for the Prime Minister’s Shram Awards in 1993. After successfully passing through various competitive stages the award was approved. The four workmen received the award making us all proud.

The fragrance of those memories still lingers……

Endnote: My newly wed wife would often ask me with suspicion about the “balls” I keep talking about in my nightmares (yes, it was a nightmarish life!). So I had to show her the alloy steel balls of 1-metre diameter on one of the Republic days when the Project would be open to the families!

« Water from Another World