In our first story, we have already looked at the history of the development of the Pumps and realized that the whole endeavor was to invent a mechanism(s) which can reverse the natural phenomenon of water flow by gravity.

Although post BC period there have been substantial effort to invent different type of mechanical pumping device utilizing kinetic energy of fluid, mathematical relation between the potential and kinetic energy in a fluid was first established in 1738 by Dutch-Swiss mathematician Daniel Bernoulli in his book “Hydrodynamica”. The theory stated that for an inviscid flow, an increase in the speed of the fluid occurs simultaneously with a decrease in pressure or a decrease in the fluid's potential energy.

The Bernoulli Principle illustrates one of the earliest examples of conservation of energy. It states that during steady flow, the energy of fluid at any point in a conduit is the sum of the velocity head (V), pressure head (P) and elevation head (Z), which remains constant as long as no losses or additions occur.

The theory can be illustrated in Figure 1 in which water is flowing through a horizontal pipe continuously from left to right assuming no energy losses due to friction. The left and right pipe sections have same diameter with reduced size at the center. The test indicates that the vertical tube (piezometers) to the left shows a higher water level i.e., higher potential energy than at the center (representing the static pressure in the respective areas). You may note that velocity of water at central section of the pipe is higher due to reduced diameter as such, by conservation of energy; static pressure at the center should be reduced, which is corroborated by the test.

You may also note that the pressure indicated in the vertical tube on the far right is highest, which reflects both static and velocity head of the fluid and this remains constant throughout the pipe length. Figure 2 represent the same test using pressure gauges. The left hand and the middle values indicate the fluid pressure or potential energy at the respective location, whereas, the last value is highest, which combines both potential and kinetic energy.

Physics behind the Pump
Let’s now turn the page to understand how this principle is helpful in understanding the pump theory!!
Suppose we need to lift water from a river or well to a higher level reservoir, which then can be utilized for distribution to various utilities by gravity. Utilizing Bernoulli’s Principle, we can work out the total energy of the fluid at pump foot valve and at the final discharge point as under –

Where,
f and r stands for locations of foot valve and reservoir respectively.
Since, water is being stored at atmospheric pressure at both the locations and considering that water (an incompressible fluid) is being sent through a uniform pipe, we can assume,
a) Pf = Pr and
b) 1/2ρvf2 = 1/2ρvr2

Therefore, fluid at reservoir level has an additional energy of (ρgzr – ρgzf), which is due to difference in altitude. Necessarily, this energy has to be supplemented through an external device to ensure a continuous flow of water from river/well to reservoir.

Let’s look at the options or means available -
a) Use series of buckets to lift the water i.e., similar to bucket elevator arrangement
b) Pushing the liquid mass using a cylinder and piston arrangement.
c) Impart energy in to the fluid using a dynamic device, part of which is converted in to potential energy.
If you look at the history of pumps, you will notice that inventions utilizing options b) and c) have been designated as pumps, probably due to the fact that these devices work on the principle of pumping energy in to the fluid.

How a Centrifugal Pump Works? 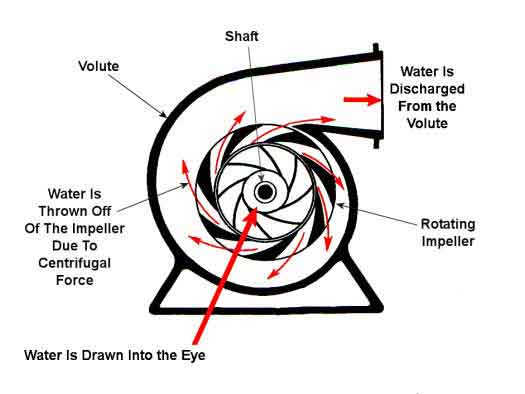 The essential components of any pump are a static part, which guides the fluid flow and a dynamic part which imparts energy to the fluid entrapped within the static part. Figure 4a & 4b below, provides the basic understanding on the pump components and their functioning.

The static part of the pump is the casing which consists of pump suction eye and the volute casing. The dynamic part is the rotating impeller, which is rotated through a driver. The rotating impeller vanes increase the velocity of the water volume trapped between the vanes which then move out of the impeller due to centrifugal force. High energy water hits the casing and part of its energy gets converted in to potential energy or pressure. 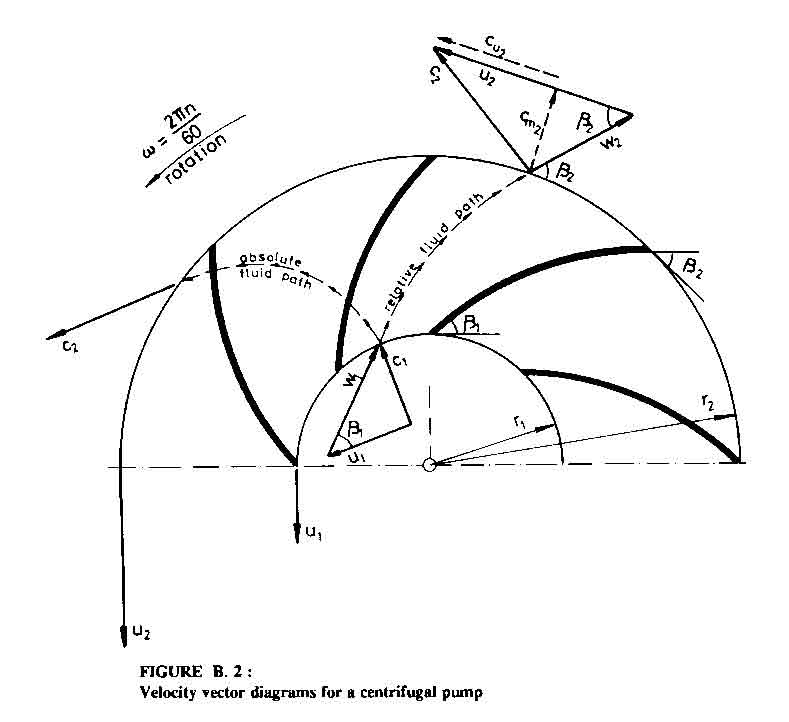 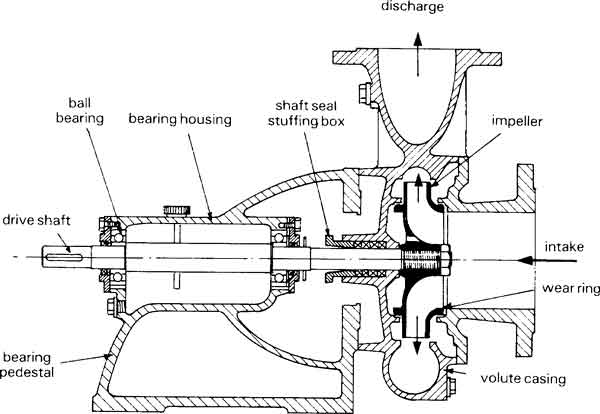 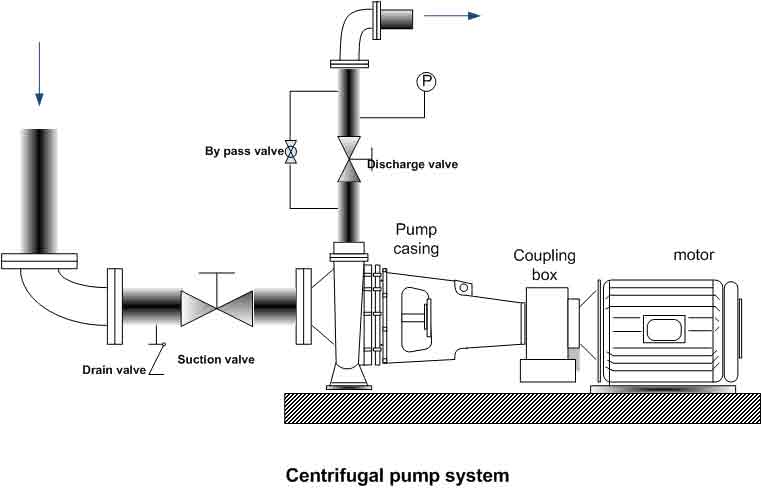 Figures 5a, 5b and 5c above provide clarity on the pump system set-up and fluid flow.
It'll take a new story now, to discuss on different type of pumps we talked before and their functioning.