Many times in life, a journey becomes more enjoyable and interesting than the destination. Often we forgot tasks we completed and the achievements that came along, but we always remember the the manner in which it was done, the people who were with us, and the unique situation that we were in.

Nothing is difficult when inputs, tools, methods, plans and experiences are in place. But sometimes, simple tasks become difficult challenges in the absence of basic information like a user manual or a wiring diagram and call for imagination and ingenuity. But "jugaad" like these are the tasks that we remember most. I remember one such from my NTPC Korba days.

Connecting a bunch of wires back to their original terminals after maintenance is a no brainer - donkey work if you marked then while disconnecting, or if there are matching numbers on the wires and terminals, or you have the wiring/schematic drawing with wire with ferrules on wires. But without any of these, it will become a challenge especially if you don't have tools and instruments like multimeters etc.

We were called one late evening to the plant to rectify a problem that was left incomplete by the maintenance staff. We walked in like invited VIPs, no drawings, and no instruments - only an "Eveready" flash light in hand. There was a defective but still breathing multimeter lying abandoned near a bunch of wires disconnected from the control panel. I tested the meter in the resistance mode and the needle went up to mid-scale. I breathed a sigh of relief, at least something to measure with.

It turned out the job was to connect 24 wires coming from six DC motors. But the catch was - to do this without any wiring number or wiring diagram. We had very little time and a defective analogue multimeter and a flash light in hand.

The "jugaad" done that night was a brilliant brain wave of common sense. Here is the story. 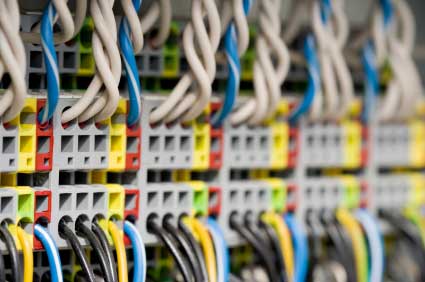 The DC shunt connected motors were having two wires coming from the stator and two from the rotor. If you pick up any arbitrary wire from the bunch of unconnected wires, another unique wire coming from the other end of whichever winding it was coming from can be found out by simple resistance measurement using a multimeter. Using this method we will have 12 pairs of galvanically connected wires - six pairs from the field windings and six from rotor windings. We knew, the winding with higher resistance will be the field winding and the one having lower resistance will be the armature winding.

Yes - this can be done by a "flick" test. That particular field (high resistance winding) winding which responds to a flick test must be from the same motor because that is the only other winding that is magnetically coupled to it.

The name of this test comes from the manner in which the test is carried out. A dry cell is repeatedly "flicked" (briefly connected to and the disconnected from) onto one winding, and a very sensitive analogue meter is kept connected to the other winding. If the two windings are magnetically coupled, then each time there is a battery flick on one winding, there will be a flick on the analogue meter on the second winding.

By doing "flick test" using an abandoned analogue multimeter, and a flash light we identified all the complementary (magnetically Coupled) pairs. The analogue defective multimeter gave us some comparison of the resistance of the windings and that was good enough for us to know which six are from the armature and which six are from the field. Half the wires were colored black and the other half was red - this gave us some indication of the polarity of connection - the reds going to the positive and the blacks going to the negatives.

When we finished the connections, everything appeared in place. The operator was called and the equipment was started. His face from under his helmet lit up.

We were back in business.